“A fascinating release” by Blues & Rhythm

“Frémeaux FA 5479 (Three CDs: 65:00/ 61:44/ 55:37) Note first that this is “Rock In French”, not “In France” as the third CD consists of rock and roll recordings from Quebec in Canada. As the notes point out, the music on the first two CDs is from France itself, pre-Johnny Hallyday, the French rock and roll pioneer, and tends to consist of performances by jazzers, big band musicians, and pop artists, jumping onto another fad like mambo and calypso… But that is not to say this is a waste of time – quite the opposite. Édith Piaf may not appeal to non-French speakers with her relatively well-known ‘L’Homme À La Moto’ (a cover of Leiber & Stoller’s ‘Black Denim Trousers And Motorcycle Boots’) - it is most definitely Édith Piaf. However,  some of the other tracks have more in common with Bill Haley in particular - the set opens with Jacques Hélian’s version of ‘Rock Around The Clock’ from 1956 and Mac-Kac’s reworking of ‘See You Later Alligator’ - rather than Elvis Presley, who only really comes to mind on track 17 of the first CD, ‘C’Est Ça Le Blues” by Moustache. Another common element is the novelty aspect (take a listen to ‘Quelle Affaire Ce Rock ‘N’ Roll’, Cab Calloway meets ‘When The Saints…’), so that some of these are obviously not entirely serious performances. There is often also a noticeable use of French slang in the lyrics, plus the occasional use of scat singing. The second CD finds the music becoming rather more homogenous, with the majority of titles from between 1958 and 1962. Henri Salvador’s ‘Blouse Du Dentiste’ was arranged by resident jazzman Quincy Jones and sounds more than a little like Screamin’ Jay Hawkins, and there are covers of material such as ‘Fever’, ‘Chantilly Lace’, ‘Peggy Sue’, The Coasters’ ‘Three Cool Cats’ (as ‘Nouvelle Vague’, the first genuine French rock hit), The Everly Brothers’ ‘Poor Jenny’, and er, Cliff Richard’s ‘Move It’. Those last four titles are all by Richard Anthony, a big star in France in the 60s.

The material from Quebec – 25 tracks - seems a little more like an empathetic if rapid response to the music from south of the border. There is obviously a stronger Elvis influence, whose ‘Don’t Be Cruel’ is covered by Carmen Déziel – she also performs ‘Blue Suede Shoes’, with both titles from 1956 and reputedly the first rock recordings in French, and Irène McNeil tackles ‘Treat Me Nice’. Other covers originate from Little Richard – ‘Long Tall Sally’ as The Clover Boys’ ‘La Grande Sally Danse’, Bill Haley’s ‘Rock A Beatin’ Boogie’, Ivory Joe Hunter’s 1956 Atlantic number ‘You Can’t Stop This Rocking And Rolling’ and duo The Jérolas cover The Coasters’ ‘Yakety Yak’ and ‘Charlie Brown’ to good effect. Willie Lamothe’s ‘Rock ‘N’ Roll À Cheval’ has yodelling, fiddle, and a cajunesque accordion, besides pinching a little from Bill Haley, and many other performances here tend towards a country sound, which may give some clue as to why these Canadian recordings sound a little more assured compared to what was on the first two CDs – there was no country tradition in France at the time these sides were made. There are two versions of ‘Rock ‘N’ Roll Du Père Noël’, originally Leon Rene’s ‘Boogie Woogie Santa Claus’, a hit for Mabel Scott and the flip-side of Patti Page’s ‘Tennessee Waltz’ – Irène McNeil’s from 1957 is well worth a listen, but Marcel Martel’s, from the following year, is astonishing, with tough steel guitar way out front; his ‘Mon Amour Du Rock ‘N’ Roll’ borrows very heavily from ‘Hound Dog’. Ernie Baribeau’s ‘Mais Si, Cherie’ is straight-ahead rockabilly, and Marcel Tremblay shows off his Chuck Berry licks on ‘Ne Me Dis Pas’. All in all then, a fascinating release – the French material makes for interesting listening, the Canadian totally intriguing.” 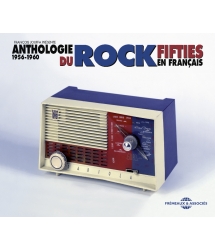