Before I get accused of featuring only Gypsy jazz in my reviews, I must draw your attention to Latcho Drom, a Hot Club like band from France. Latcho Drom were on the bill at the 1995 Django Reinhardt Festival and played a storming set gaining one of the week end’s best responses from the highly critical audience. This CD, while sounding sometimes sterile by comparison to the live set, still brims with original and authentic gypsy virtuosity lacking is so many bands of this type around today. The program is varied mixing Reinhardt favorites with good ol’ American standards like After You’ve Gone and Cheerokee (written in tact by an Englishman!). For lovers of Django style guitars, search this CD out, because unlike a lot of modem groups these guys are the real thing. French Gypsy music played by a French virtuoso guitarist. JUST JAZZ GUITAR
Produits associés 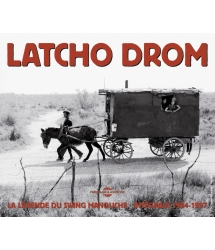