“Recommended to all petrol heads” by Blues & Rhythm

I recall reading a review many years back written by our esteemed editor, when he wound up a critique of some much-reissued Chess material with words along the lines or ‘you may have this material already but this set is great for listening to in the car’. I could write something similar about this triple CD set, but then, that actually is its ‘raison d’être’. Mind you, I am not sure how many readers would have all this material anyway – after opening with Nat ‘King’ Cole’s cool (Get Your Kicks On) Route 66’ (composer Bobby Troup and Chuck Berry open the following two CDs respectively with this same song), we shift into a higher gear with some fine hot rod themed rockabilly interspersed with a couple of examples of bebop, and also blues from Lightnin’ Hopkins and Lowell Fulson. I’m not sure if Connie Allen is really singing about cars on ‘Rocket 69’, but Jackie Brenston certainly is on the following ‘Rocket 88’. Billy Strange’s curious ‘Diesel Smoke, Dangerous Curves’ precedes Walter Horton’s ‘Cadillac Blues’, and the remainder of the CD includes Howlin’ Wolf, The Medallions (Screamin’ Jay would have been proud of the sound effects on ‘Buick ‘59’and ‘Speedin’), Billy Jack Wills with Bob Wills, Chuck Berry, and the slick jazz or Chet Baker and Art Pepper, with, to close out, ‘UAW-CIO’ by The Union Workers – Pete Seeger, Josh White, Burl Ives, Alan Lomax, Tom Glazer, Sonny Terry and Brownie McGhee. The other two discs are almost as varied, with a diversion into Bermudan calypso added to the mix on the second set – Al Harris supplies ‘Taxi’. This time around, I’m not sure Mildred Jones is really singing about cars either (‘my daddy’s got a long, long, long Cadillac…’)! Parking problems also become a theme too. By the time we arrive at the third disc, we also cruise into Serge Gainsbourg (well, it is a French release), Bob Dylan, The Mar-Keys and Nelson Riddle’s theme to the television series, ‘Route 66’, pulling up alongside Chuck Berry, Gene Vincent, Duane Eddy, The Del-Vikings, Bo Diddley, Charlie Ryan, Carl Perkins, Vince Taylor And His Playboys, The Delicates, Miles Davis, Vernon Green, Eddie Cochran and Ray Charles. Recommended to all petrol heads of course. It’s just the ticket and the way things are going. It’ll soon be cheaper than a litre of petrol.
Norman DARWEN – BLUES & RHYTHM
Produits associés 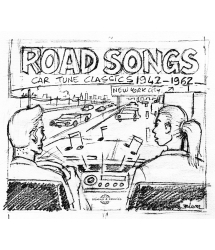