Reggae fans will also be delighted by Caribbean Heat

"Outside of Jamaica, there has always been a lot of confusion about mento, the indigenous folk genre that ruled the island before the advent of electric forms such as ska, rock steady and reggae. The confusion stems from mento’s overseas marketing as calypso, to cash in on the craze stimulated by Harry Belafonte’s wide-ranging success. But mento has distinctive instrumentation that often makes use of homemade wind instruments, such as a bamboo saxophone, as well as the oversized thumb piano, known locally as a “rhumba box”. Mento must thus be seen as a distinctly Jamaican music, particularly as its lyrics often deal with political and social issues peculiar to Jamaica.
Thanks to websites such as mentomusic.com and popular acts such as the Blue Light and Blue Glaze mento bands, there has been a recent upsurge of interest in the form, making the arrival of this two-CD box-set all the more timely.
The compilation, which is split between the “country” and “urban” mento styles, features some of the earliest recordings made in Jamaica, and the accompanying 44-page booklet explains the significance of pioneering figures such as Lord Flea, Count Lasher, Harold Richardson, Hubert Porter, and Lord Fly, all of whom are featured here. Reggae fans will also be delighted by the inclusion of early efforts featuring guitarist Ernest Ranglin and singer Laurel Aitken, while the eminent Jamaican dialect folklorist Miss Lou provides a fascinating early take of “Day O”."
by Dave KATZ - CARIBBEAN HEAT
Produits associés 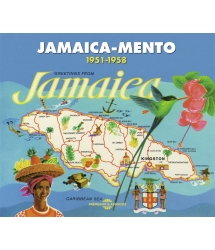