The famous singer from Quebec by Dirty Linen

The famous singer from Quebec known as La Bolduc (1894-1941), whose real name was Mary Travers, achieved great succes during the Depression. Seventy of her 84 recordings were done beetween 1929 and 1932, a time  when the record industry was suffering terribly. Her lyrics, which were sung in colloquial French and sprinkled with Anglicisms, dealt lighteartedly with such everyday subjects as work and unemployement, jealousy, mosquitoes, salesmen, doctors, and her native Gaspésie. Even the harsh conditions of the time were always treated with an uplifting sense of optimisism. Her characteristic vocal technique was based on the "turlute", a kind of scat mouth music wich replaced such things as fiddle breaks. Same of  La Bolduc's song, such as "La Bastrigue", have remained very well known to this day. The singer, whose recordings also displayed her skill on Harmonica, was later snubbed by record producers, although she continued to fill concert halls until the end. La Bolduc's death in 1941 from cancer went by almost unnoticed in the press but she has subsequently been the subject of a Charles Trenet song and a postage stamp, is studied in universities, and has a museum devoted to her. Chansons comiques, which comes with a 20-pages bilingual booklet, compile 38 of the singer's best recordings on two CDs, although several of her better-known songs have been omitted. DIRTY LINEN
Produits associés 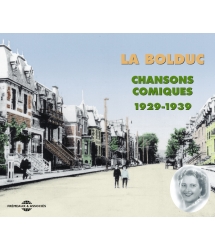