“This is also a must.” by Blues & Rhythm

“Clarinettist Eugène Delouche, born in 1909 in Martinique, was one of the major figures in the rise in popularity of the music of the French Caribbean in Paris in the early 1930s - he was adjudged to be the much older pioneer Stellio’s most serious rival – and Fremeaux has included many of his excellent titles on their surveys of the beguine and related music prior to the Second World War. This double CD, however, concentrates on his Ritmo label, which issued his own material in the early 1950s. The 48 tracks are in chronological order and include several previously unissued tests.
As the band name indicates, there is a subtle jazz tinge to some of the material on offer here, though the bulk of the tracks sound very traditionally Caribbean. Stylistically, the majority of numbers is romping instrumental biguines, usually with Eugène’s lively playing out front sharing the lead with trombone or piano and supported by small rhythm sections. There are also examples of other Antillean styles such as mazurkas and waltzes (Delouche was particularly noted for his Creole waltzes), along with other ‘tropical’ genres which include the romantic bolero, samba, mambo, guaracha, paso doble, and baïon. The more obvious jazz side of Eugène’s music comes through, mainly on a single session from 1952, which resulted in ‘After the Rain’, a very convincing big band blues, and the slow ‘Last Spleen’, a fine performance virtually indistinguishable from an American band. The remaining four titles of this session have more of a ‘tropical’ direction, with the flute of Luis Fuentes adding something of a Cuban favour.
On the second disc the contribution of singer David Martial – much later to become a big star – and veteran singer and electric guitarist don Barreto are especially noteworthy. Just over half of this disc consists of excellent biguines (including ‘Shell X Cent’, a long-time personal favourite); the last nine numbers are back in ‘tropical’ territory, though the two animated sambas (‘Mangozo’ and ‘Malangua’) are well worth hearing. The title of the waltz ‘Loin de mon île’ translates as ‘Far from my Island’ and the typically French sound may be a little too close to the truth of the title for some readers’ comfort.
Overall though, this is another excellent release of vintage French Caribbean music. The sound quality is fine throughout, and the packaging is well up to the label’s usual high standard. If you have enjoyed any of Frémeaux’s previous releases in the genre, this is also a must.”
By Norman DARWEN – BLUES & RHYTHM
Produits associés 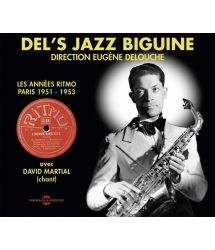