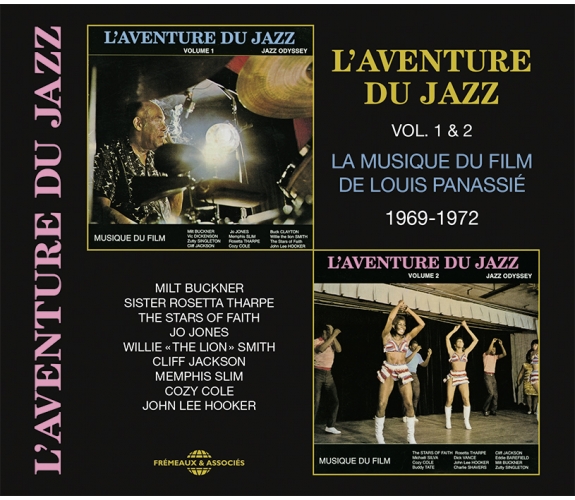 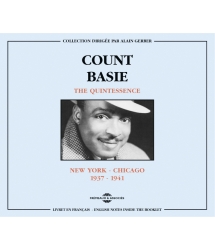 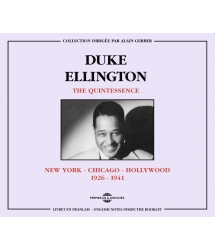 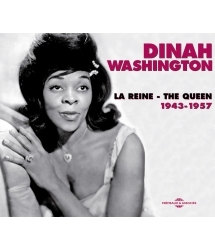 When Louis and Claudine Panassié were preparing their “L’Aventure du Jazz” project, they had every intention of capturing great jazz players on film with beautiful images but, since they weren’t specialists in audio techniques, they had fears that in comparison the sound recorded for the film might leave something to be desired… They hedged their bets by acquiring a first-class “professional” tape-recorder, but they knew they were going to be shooting scenes wherever the musicians were playing, and so recording-conditions wouldn’t always be ideal.
As it happened, with rare exceptions the sound in the film turned out to be excellent overall, with the takes sounding better than some recordings made in the best-equipped studios… And that gave Louis and Claudine Panassié the idea of ensuring that substantial parts of the film soundtrack from “L’Aventure du Jazz” were released separately on record. The quality of the music itself was exceptional, and the result a superb collection of performances by a whole galaxy of great jazz musicians.
The music contained had so much quality, and at the same time so much diversity, that those people lucky enough to own the records were bound to want to see the film (or see it again!) — and vice versa, because seeing “L’Aventure du Jazz” on the silver screen would no doubt encourage many jazz fans to acquire the two discs as souvenirs of the sound heard in the cinema…

THE BANDS
The orchestra led by Buddy Tate was one of the best, and for years it had been a highlight of the famous Celebrity Club in Harlem, notably thanks to its leader, whose tenor sax was recognized by connoisseurs as one of the most swinging horns in jazz history. In addition, the great drummer Cozy Cole was one of the band’s recruits, and these performances were recorded in May-June 1970.
Dick Vance formed his band in the spring of 1969 to accompany numerous dancers on an African tour, among them Lou Parks’ remarkable “lindy hoppers”. Filmmakers Louis and Claudine Panassié took advantage of rehearsals before the band’s departure to film the dancers and record the orchestra. Tin Roof Blues was recorded alone without a dance routine, but Jumpin’ at the Woodside was taped while the dancers were rehearsing and you can feel the stimulating effect the dancers were having on the playing of Eddie Barefield and the other musicians.
The Panassié Stompers were formed especially for the film. The pick-up group contained eight of the best jazzmen in New York at the time, all with obvious affinities in their styles. They were brought together in a club in May-June 1970, and the irresistible Jimmy Crawford leads a wonderful rhythm section: the drummer was famous for his exploits behind Jimmie Lunceford and his orchestra. He swings with such intensity that the soloists consistently play at their best.
THE SOLOISTS
Recorded in spring 1969, the two pianists appearing in the film were Willie Smith, known as ‘The Lion’, and Cliff Jackson. They were what jazzmen call “complete piano players” — their presence alone was enough. Both men enjoyed a career in a period when a pianist alone was enough to bring a whole dancehall to its feet, with his left hand acting as the rhythm section and the right providing the whole of the melody. Willie Smith was also a renowned composer, as shown by the two pieces he plays in “L’Aventure du Jazz”, Relaxin’ and its incredible melody, and the theme Here comes the band, a synonym for swing.
As for Milt Buckner, also recorded in ‘69, he was one of the greatest organists jazz has ever known. Swingin’ in Biarritz shows his penchant for swing while his reading of Tea for Two, an extraordinarily emotional performance, puts this famous tune in an entirely new light.
Three of the greatest jazz drummers also take solos in the film: Zutty Singleton (Louis Armstrong’s former drummer) represented the pure New Orleans style of percussion; Cozy Cole was a complete musician and the favourite of numerous jazzmen; as for Jo Jones, he reached fame in the ranks of the Count Basie Orchestra as one of the most original drummers, incisive and inventive… and humorous.

Doesn’t everyone know today that spirituals and blues were the origins of jazz? Spirituals are represented in the film through Sister Rosetta Tharpe, who was not only one of the most moving black singers but a unique guitarist and, at times, also a pianist, as you can hear on I shall not be moved.
The blues pieces here are played by two of the most famous singers, one of them a guitarist, John Lee Hooker, and the other a pianist, Memphis Slim. The latter had the idea of asking Madeleine Gautier, a blues specialist, to translate the lyrics of one of his songs, Beer Drinking Woman, as he went along — La buveuse de bière (the title in French) is one of those pieces with great humour that is quite common in the genre. This is a genuine “first” to be found in “L’Aventure du Jazz”. All the pieces with Rosetta Tharpe, Memphis Slim and John Lee Hooker were recorded in spring 1969.
Hugues PANASSIÉ
(In his preface for the first release of music from “L’Aventure du Jazz”, February 1971).
Adapted into English by Martin DAVIES
L’AVENTURE DU JAZZ, THIRTY YEARS LATER
When Hugues Panassié wrote the above lines in early 1971, the film’s heroes were still among the living: watching all those great musicians on a wide screen, and then listening to them on the two albums that were published, no-one would have thought that this was a twilight period!
The rest of the story was rather cruel, however: Louis Armstrong was the first to pass away, and when the third and last part of filming took place in 1972, some of the others had already followed him. More recently, Buddy Tate et John Lee Hooker have closed their doors (in a manner of speaking), and today almost none of the film’s original participants is still with us. But for all that, neither the visual side nor the music has aged: in retrospect, the time that has gone by since then has merely increased the density (and intensity) of the emotions raised by the film.
At the end of 1974, Hugues Panassié, the mainspring of the film by his son Louis, went looking for all the old friends who’d graciously accepted to take part in “L’Aventure du Jazz” — a royal gift, and it became irreplaceable testimony of a whole era. Hugues Panassié had been the first (in the Thirties) to reveal to Americans a whole chapter of their own history, and one might say that Hugues Panassié was also behind this film (even the Americans hadn’t thought of making this one in a whole century of jazz… it was beyond belief!)
For this new edition of excerpts from the film’s soundtrack, the technical change from vinyl to laser made two extra half-hours of music possible, and so we went on the hunt for material that hadn’t been released, delving into our memories (and the sixty-something magnetic tapes that accompanied them.) Unreleased material… well, that’s saying something! First, there were reels of film dating from 1972, i.e. after the release of the first record-albums, not to mention music that hadn’t been used in the film solely for reasons that had to do with the film itself, and not their musical value, which remained intact. There was enough of the latter to make a third CD possible and, who knows, perhaps even a fourth disc…
Whether the sound had been released or not, we went back to the original master tapes to produce this set. Maybe you are already familiar with the contents of those two records from 1971, but not the rest, so here, in addition to the pieces that are in fact reissues, you can find sounds that have never been heard before at all: the first version of the Panassié Stompers’ chez Panassié, for example; the Milt Buckner-Jo Jones sides from 1972; the astonishing drums of Michael Silva; the very moving Music on my Mind sung by Willie ‘The Lion’ Smith; the Stars of Faith performing in their own parish; Charlie Shavers singing the blues; and also some privileged moments in the company of Sister Rosetta Tharpe, here put together for continuity.
The result is an astonishing document – one that we publish as such, even if the equipment disappointed the technical crew and they had to make do with sound deficiencies – that bears witness, albeit imperfectly, to the astounding power of a Sunday morning at Saint Luke’s Church somewhere in the suburbs of Philadelphia.
Laurent VERDEAUX
Adapted into English by Martin DAVIES
© Frémeaux & Associés 2017
DISCOGRAPHIE - VOLUME 1 (JOCD 01)
Milt BUCKNER, orgue - Jo JONES, batterie : Biarritz, France, prob. Fin juillet 1969
1. SWINGIN’ IN BIARRITZ (Buckner - Jones)    3’41”
2. TEA FOR TWO (Youmans)    4’36”
3. CARAVAN (Ellington - Tizol)    7’33”
PANASSIÉ STOMPERS : New York, printemps 1970
Buck CLAYTON, tp - Vic DICKENSON, tb - Eddie BAREFIELD, as - Budd JOHNSON, ss, ts - Sonny WHITE, p - Tiny GRIMES, g - Milt HINTON, b - Jimmy CRAWFORD, dms.
PANASSIÉ STOMPERS :
4. BASIN STREET BLUES (Spencer Williams)    3’23”
5. MONTAUBAN BLUES (Budd Johnson)    6’09”
6. CHEZ PANASSIÉ Take 1 (Buck Clayton)    5’28”
7. CHEZ PANASSIÉ Take 2 (Buck Clayton)    4’08”
Memphis SLIM, vocal et piano - Madeleine GAUTIER, vocal (9) : Montauban, 65 fbg du Moustier, prob. 23 mars 1969.
8. NO (it’s all over) (Chatman)    4’08”
9. BEER DRINKING WOMAN (Chatman)    3’41”
Willie “the Lion” SMITH, piano, vocal (12) : New York, fin mai 1969
10. HERE COMES THE BAND (Willie Smith)    2’57”
11. RELAXIN’ (Willie Smith)    1’47”
12. MUSIC ON MY MIND (Willie Smith)    3’17”
Zutty SINGLETON (solos de batterie) : New York, juin 1969
13. NEW ORLEANS DRUMS (Singleton)    1’45”
14. RIM SHOTS (Singleton)    0’53”
15. DRUM FACE N°3 (Singleton)    1’30”
Sister Rosetta THARPE, vocal et piano: Philadelphie, fin mai 1969
16. I SHALL NOT BE MOVED (Trad.)    2’21”
17. ABOUT MY LIFE (Rosetta Tharpe)    1’22”
18. JUST A LITTLE WHILE TO STAY HERE (Trad.)    4’42”
DOCUMENT : Philadelphie, dimanche 9 juillet 1972
19. Quelques instants de l’office dominical de l’église évangéliste St Luc, Philadelphie    6’35”

This set brings together the recordings for Louis Panassié’s historic film made between 1969 and 1972. The film is one of the most important in jazz history, and it gave birth to two wonderful 12” LPs in 1972. Over thirty years later (2005), Laurent Verdeaux founded the jazz label Odyssey Records in order to preserve this music legacy, and he began restoring and digitizing these legendary titles — whose sound quality, it has to be said, was exemplary for the period. Apart from the beauty of these moments of truth in music, this double album also offers a golden opportunity to revisit the Seventies in the company of some of the figures whose music went straight to the heart of seminal jazz and blues, from Milt Buckner and John Lee Hooker to Willie ‘the Lion’ Smith and Sister Rosetta Tharpe.
Patrick Frémeaux 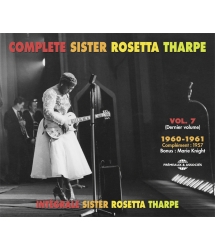 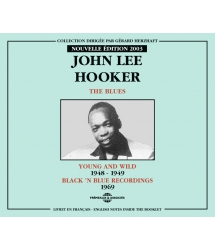 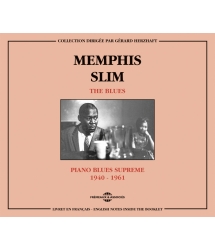