Born in Pointe-à-Pitre, in the former French colony of Guadeloupe in the eastern Carribean in 1945, Alain started on piano at the age of eight and by the sixties he was regurarly appearing on local records, playing all types of music – but particularly the biguine- and also absorbing the jazz sounds of the likes of Charlie Parker and Dizzie Gillespie. In 1973 he ended up in Paris and after accompanying many visiting American jazz stars, he now has his own successful solo carreer. This set was originally released by Sony in 1992 and has achieved legendary status in some circles. Alain goes back to his Caribbean roots, exploring the jazz inflected biguine sound of the early fifties known as « wabap ». He has an obvious fondness for the compositions of the late trombonist Al Lirvat (five out of the dozen titles include him as sole or co-composer), and there are three associated with Alain’s one-time employer, the sax player Robert Mavounzy ; experienced ears may hear hints of the mazurka and even the African-rooted « gwo-ka » drum music of Guadeloupe. Although has the support only of bassist Eric Vinceno and drummer Serge Marne, the sound is very much that of a full orchestra, thanks to his digital dexterity. However, the overall impression is one of a man totally enjoying his work rather than trying to impress for the sake of it. His enthusiasm and musical quality, together with Frémeaux’s excellent packaging, ensure a high quality release. Norman DARWEN – BLUES & RHYTHM
Produits associés 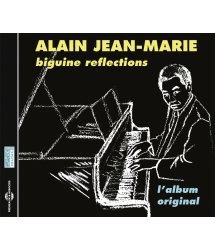