This kind of material is becoming more familiar in this “roots of soul” context these days, but Frémeaux offers a more pared down history than some others. It works too, as the listener is taken from the early days of the recording of black music to something that has an obvious correlation in soul music very quickly. It is interesting an instructive to compare, on the first disc, Blind Willie Johnson’s opener with Marie Knight’s version of “I Just Can’t Keep From Crying Sometimes”. At the end of the same disc, The Southern Tones, recording for Duke in January 1954, provide the inspiration for Ray Charles and “I’ve Got A Women”, recorded ten months later and which rather neatly opens disc two. I do not recall hearing Little Miss Cornshucks’ version of “Try A Little Tenderness” before either, though I know Otis Redding’s cover well. The second disc contains many performers who cut classic soul material, and the line between r&b and soul music in indeed blurred here; this confusion maybe even extends on to gospel too, as Aretha’s “Are You Sure” has sacred lyrics backed by the Ray Bryant Combo, recorded not long after Ray had enjoyed a hit with the dance number, “Madison Time”. The third disc opens with a Jamaican blues performance but it justifies in its inclusion as a mid-tempo rocking performance with gospel lyrics – though by the timescale of 1961-1962, there was plenty of genuine soul music around by anyone’s criteria. That last disc really is an impressive collection of some of the biggest and best songs of those years. As is usual with Frémeaux releases, the English notes are abbreviated from the more detailed French originals, but even so, compiler Bruno Blum does present a convincing case for the “roots of soul”; though the selection of music makes for an even stronger argument. Most readers should be familiar with much of this material, hence this short review. This brevity is no reflection on the quality of the music and this is indeed a thoroughly entertaining and educative release.
Par Norman DARWEN – BLUES & RHYTHM
Produits associés 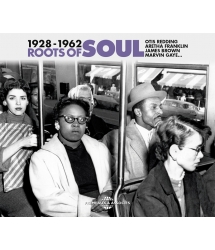