♦♦♦♦ If anything substantiates what a great composer Duke Ellington was, this recording should do it. Black, Brown and Beige was a suite of such magnitude that it was acclaimed from the first night it was presented in January 1943 at New York’s Carnegie Hall. According to the liner notes, son Mercer says that The Duke only performed it completely two times in his lifetime, the one at Carnegie Hall the first. But tunes from the suite – Come Sunday and Work Song, for example – have been performed by his orchestra countless times. No matter that. Considering that the live performance in 1943 is recorded – and in an often muddy fashion obviously not originally meant for public consumption – yet now on the market, getting it whole in super high CD fidelity and with an orchestra so perfectly in tune with the music and spirit of The Duke is very special indeed. Ellington wrote his music with his band members in mind but here translated into the hands of Bolling’s personnel it certainly shows itself to be one of the finest of Ellington’s creations. The Bolling Orchestra is more than up to the challenge of emulating the work. Indeed, checking this recording with that of the original, Bolling has kept the cadence and the drive of that initial performance intact throughout. Don’t miss this opportunity to rally hear the genius of Ellington as well as Bolling.
W.Y. - RAPPORT (West Coast Review of Books, Art & Entertainment)
Produits associés 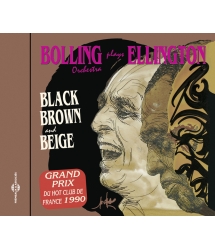