“Essential listening for the zydeco curious” by Offbeat

“Though there are many paths to take when examining zydeco’s evolution, it’s hard to imagine a more comprehensive compilation than France’s Frémeaux & Associés’ Zydeco: Black Creole, French Music & Blues 1929-1972. The 48-track collection is divided evenly between two discs and features over 30 artists who recorded from its embryonic genesis to its first generation maturity. Disc one features five numbers recorded between 1929 and 1934 by iconic figureheads Amédée Ardoin (accordion) and Dennis McGee (fiddle), an influential, racially mixed duo who were cornerstones of Creole and Cajun music. This talented accordionist injected such a raw, impassioned bluesy feel into his music that his performances are still bone-chilling decades later. Zydeco’s catch phrase “zydeco sont pas salés” or its root “les haricots sont pas salés” (“the snap beans aren’t salty”) is a sub-theme of sorts, first emerging in this collection as the frenetic juré “J’ai fait tout le tour du pays,” performed by Jimmy Peters as part of the 1934 Lomax archives. The phrase is prevalent in other selections as well, including those by accordionists Sidney Babineaux and Albert Chevalier of the early ’60s. According to Babineaux, the phrase already existed towards the end of the nineteenth century. Disc two focuses on zydeco’s founding father Clifton Chenier on 10 tracks. Some selections (“Ay Te Te Fee,” “Hot Rod”) are house-rattling rockers; others (“Clifton’s Blues,” “Where Can My Baby Be”) are among the most gut-wrenching, tear-soaked blues ever recorded. While Clarence Garlow’s oft-heard, calypso-charged “Bon Ton Roula” is featured here, also included are two Garlow rarities (“Za Belle,” “Make Me Cry”), the first to be recorded with alternating French and English verses. Interestingly, the collection features early incarnations of famous songs, such as Douglas Bellard’s 1929 waxing of “Moi j’connais la cause que je suis condamné” that’s known today as “Les Flammes D’Enfer.” Ardoin’s “Two Step de Prairie Soileau” is better known as “Quoi Faire.”  Perhaps the most unusual track is “Zydeco (Zolo Go),” which was Texas bluesman Lightnin’ Hopkins’ stab at zydeco. It’s sans accordion but instead features an organ—one you might hear at a hockey match—attempting to emulate the sound of an accordion. There’s a lot to be said about the merits of this collection, especially with the inclusion of many lesser known stalwarts who also contributed to zydeco’s evolution. The authoritative 48-page bilingual liner notes make for essential reading, just as this is essential listening for the zydeco curious.” 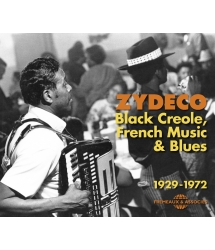