"The title translates as 'first recordings', of course, and the subtitle, rather accurately, as "the birth of French Caribbean world music". For much of the 80s and 90s, Malavoi was one of the most respected musical outfits of the French Caribbean. Whilst Kassav' tore across boundaries with their cutting edge zouk sound, Malavoi was a 'roots' band from the very start, long before the term had any meaning, respected for its conscious championing of the older Antillean traditions in the face of intense competition from Haitian and Latin music, and a commitment to making relevant contemporary music in the old-fashioned way - why, it even boasted a front-line of four violins!
A couple of numbers feature rather smooth crooning, and one session a vibraphone, but most of the tracks on this CD are excellent examples of Malavoi's fine combination of the old and the new, careful swinging arrangements of the venerable biguine of the islands, all originals but subtly faithful to the classic style." Norman Darwen - ROCK 'N' REEL
Produits associés 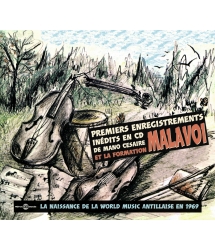