“She is in top form” par Blues & Rhythm

This is the third instalment of this series (‘Mahalia Sings’) within a series (‘Complete Mahalia Jackson’), containing the songs filmed by the Television Enterprise Corporation (TEC) at the Paramount Studios in Hollywood in June and July 1961, following Mahalia’s return from a trip to Europe and The Middle East. As on the first two CDs dealing with this material (FA 1324 and Fa 1325, reviewed in B&R317 and 319 respectively), she is in excellent throughout, and as with ‘When The Saints…’ on the preceding volume. I was expecting very little from her version of the overworked ‘He’s Got The Whole World In His Hand’s and so was very pleasantly surprised with this impassioned version. The accompanying musicians include Mahalia’s regular pianist and musical director Mildred Falls, Edward C. Robinson mainly on organ and possibly also piano, with Louise Overall Weaver-Smothers also on organ. The jazzers Barney Kessel (guitar), Red Mitchell (bass), and Shelly Manne (drums) make occasional appearances, most notably on the show-biz flavoured version of ‘Give Me That Old Religion’. Once past that though, the standard certainly picks up, and the band accompanied ‘I’ll Never Turn Back No More’ is nicely bluesy. The emphasis here is on spirituals and gospel numbers, with fewer hymns than on the preceding volume and a number of songs Mahalia did not record elsewhere. As with its predecessors, you will need this if you have followed the series so far, but I do prefer these ‘Mahalia sings’ releases to much of Mahalia’s later output. The emphasis is certainly on her vocals, which is as it should be, and as already mentioned she is in top form.
Par Norman DARWEN – BLUES & RHYTHM 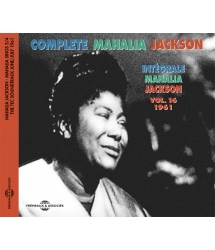