“This gem rejuvenates the percussive Afro-rhythms"

“Named for the flower that scents the air of Port-au-Prince, the capital of Haiti, the Ilan-Ilan band was created in the early 1980s by singer, musician and educator Reynold ‘Renòl’ Henrys and the late anthropologist Michel-Rolph Trouillot (who wrote the lyrics to Renòl’s music, and whose book Silencing the Past inspired Raoul Peck’s 2021 documentary series about colonisation and genocide, Exterminate All the Brutes). Renòl is still firing on vocals and percussion, his dusky tones sustained by the guitars, percussion and vaksin (a cylindrical bamboo trumpet) of various elder Guadeloupeans immersed in the ways of the tanbouyé master drummers: François Domergue and René Dambury – one-time percussionist for Chet Baker and Mory Kanté. Politics feels paramount. This is the sound of Haitian tradition, delivered by a bandleader (Renòl) with roots in anti-Duvalier rhetoric and a lyricist (Trouillot) giving voice to those without access to the written word (translations, then, would have been welcome). This gem rejuvenates the percussive Afro-rhythms at the heart of Haiti’s musical heritage – kokoda, kontredans, petwo, rara festival music – either by playing them straight, texturing them in spiralling layers of sound. The short title-track, and the pretty ‘Bon Lizay’ are highlights.”
By Jane CORWELL – SONGLINES 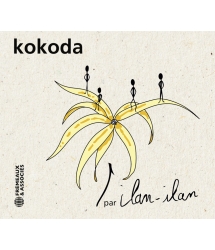