It’s been said that when strands of American music wander off to the other side of the pond, it’s a watered-down variety, at best. Of course, every blustery, thoughtlessly uttered overgeneralization has its fallacies, and this is certainly one of them. The French Vintage Jazzmen sextet not only approaches New Orleans trad jazz with reverence and piety, but it possesses flawless tonality, razor-sharp chops, and seemingly infinite lung power that could fill a Hummer airbag. The band’s knowledge and repertoire is encyclopaedic, spanning from its embryonic turn-of-the-20th-century period (Buddy Bolden’s “Don’t Go Away Nobody”) through the rootin-tootin’20s (with several King Oliver selections) to its revival heyday. And speaking of heyday, clarinettist Tommy Sancton, a New Orleanian expat, apprenticed with the legendary George Lewis as a teenager. Here, he honours his mentor with a spry, quick-footed rendition of “St. Philip Street Breakdown” that climaxes with a sustaining five-measure note. (Sancton recently published a book, Song For My Fathers: A New Orleans Story in Black and White, about his experiences). With this talent, the soloing is frequently sublime, not to mention molten hot. When any of the three lead instrumentalists – Sancton, trumpeter / band leader Dan Vernhettes, and trombonist Olivier Beuffe – solos, the other two usually diverge from the melody line with offsetting riffs held together by a thin, rhythmic thread woven by banjoist Siphan Upravan, drummer Guillaume Nouaux, and bassist Enzo Mucci. Often they’ll approach a tune serenely and sedately in the beginning, only to have it boiling by the finale (“Give It Up”). Top-notch stuff.
Dan WILLGING – DIRTY LINEN
Produits associés 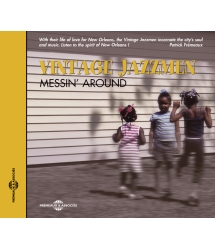