B&R indexer Robert Sacré was involved with the compilation of this double CD, and he kindly got the distributors to send me a copy after I had a fit of covetousness on seeing it at his house last summer. The guilty men are Frémeaux & Associés S.A., 94300 Vincennes, France (phone 43 65 24 22) ; since they don’t seem too bothered about publicishing their achievement outside France, I’m nobly doing it for them now. There are some duplications in the above track listing with releases on Old Timey and Columbia, but for Cajun aficionados it pretty much reviews itself, I guess. All the great names of the early days of Cajun recordings are here, represented by their best and/or most important sides. Disc One covers what might be called « roots Cajun », from « Lafayette », which started the commercial recording of the music, through big hits and classics, to rare examples of polkas and mazurkas. Disc Two is devoted mainly to the string bands of the thirties : there are more  hits, like « Wondering », more classics, such as the Ardoin-Mc Gee duo’s two, blues from Nathan Abshire and Happy Fats (a disgusting racist, but a great musician), et cetera. The notes are extensive and detailed, if a touch naïve about race relations in Louisiana, and the photos, all hitherto unpublished I think, are wonderful ; on one of horses and buggies parked outside frank’s Theatre for the Southern premiere of « Louisiana Story » is especially evocative. Most splendiferous of all, of course, is the music : there is no space for a detailed run down, but to pick out an unexpected gem from each disc, Delma Lachney’s track is a beautiful adaptation of the Appalachian tune « Rye Whiskey » (aka « Drunken hikkups »), and Joe Werner will convulse anyone who thinks, like me, that « Sarh Jane » was Jazz Gillum’s best record. The 78s, all mint or as nearly so as makes no odds, come from  Benno, Häupl’s collection, which is the best in Europe, if not the world. (Benno, incidently, has done, and hopes to publish, the discographical work Alan Balfour and I were planning, as the few readers who offered  to help know already). File under « must have ».
Chris SMITH – BLUES & RHYTHM
Produits associés 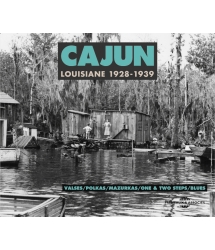