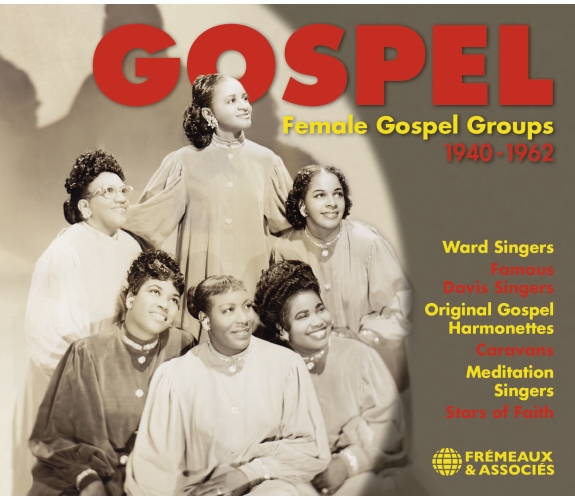 Female gospel bands were made up of the best singers from church choirs, and so they featured the most flamboyant gems that Black America had to offer. The intensity in their magnificent songs illuminates the story related by Jean Buzelin, with recordings drawn from a well of untold talents. They make this a set of inestimable historical value that throws a bright light on these forgotten “soul sisters of the shadows.
Patrick FRÉMEAUX

CD1 (1940-1953) - SALLIE MARTIN SINGERS THANK YOU JESUS • MARTIN & MORRIS SINGERS I KNOW I HAVE ANOTHER BUILDING • SOUTHERN HARPS WHAT A FRIEND WE HAVE IN JESUS • SOUTHERN REVIVALISTS OF NO MY TROUBLE IS HARD • WARD SINGERS: WHEN I GET HOME • I’M BOUND FOR HIGHER GROUND • TELL THE ANGELS • MARY JOHNSON DAVIS SINGERS I’M GOING TO WAIT ON THE LORD • DAVIS SISTERS GETTING NEARER TO MY LORD • ANGELIC GORPEL SINGERS BACK TO THE DUST • ELITE JEWELS STANDING ON THE ROCK • FAMOUS WARD SINGERS THE OLD LANDMARK • CLARA WARD SPECIALS COME IN THE ROOM • JACKSON GOSPEL SINGERS COME UNTO ME • ORIGINAL GOSPEL HARMONETTES: EVERY DAY WILL BE SUNDAY • WHEN I REACHED MY HEAVENLY HOME • ONE MORNING SOON • GOLDEN HARP GOSPEL SINGERS I’LL MAKE IT SOMEHOW • GAY SISTERS GOD IS ON OUR SIDE • WINGS OVER DIXIE WORKING ON THE BUILDING • BREWSTER SINGERS THESE ARE THEY • ROSETTE GOSPEL SINGERS HE LIVES IN ME • CARAVANS: GOD IS GOOD TO ME • ON MY WAY HOME.

CD2 (1952-1959) - DAVIS SISTERS: IN THE MORNING WHEN I RISE • STAND BY ME • FAMOUS WARD SINGERS OH LORD, HOW LONG • WARD SINGERS: I’M CLIMBING HIGHER AND HIGHER • GREAT IS THE LORD • SIMMONS AKERS TRIO HE’S ALRIGHT WITH ME • ORIGINAL GOSPEL HARMONETTES: YOU MUST BE BORN AGAIN • YOU BETTER RUN • CARAVANS: WAIT FOR ME • ONWARD CHRISTIAN SOLDIERS • ANGELIC GOSPEL SINGERS I’LL BE ALRIGHT • LUCY SMITH SINGERS JESUS, LOVER OF MY SOUL • FAMOUS DAVIS SISTERS: WON’T IT BE WONDERFUL THERE • SHINE ON ME • WHAT HE’S DONE FOR ME • ARGO GOSPEL SINGERS: NEAR THE CROSS • BRING BACK THOSE DAYS • ORIGINAL GOSPEL HARMONETTES: 99 1/2 WON’T DO • THAT’S ENOUGH • ANGELIC GOSPEL SINGERS ALL THAT I NEED IS IN JESUS • DELLA REESE & MEDITATION SINGERS HARD TO GET ALONG • CARAVANS: SWING LOW • I’M WILLING • SOUTHERN ECHOES OF CHICAGO THE STORY OF JOB.

CD3 (1958-1962) - WARD SINGERS WE SHALL BE CHANGED • CLARA WARD SINGERS: THE SEVEN SEALS • VI FOUND THE KEYS THE KINGDOM • STARS OF FAITH: WHEN I LAY THIS BODY DOWN • MEAN OLD WORLD • LOOKING FOR JESUS • JEWEL GOSPEL SINGERS TOO LATE • ORIGINAL GOSPEL HARMONETTES: LOOKING FOR A HOME • SO MANY YEARS • 10 BESSIE GRIFFIN & GOSPEL PEARLS CHILDREN DON’T YOU GET WEARY • DREXALL SINGERS I WANT TO GO HOME • SALLIE MARTIN SINGERS: OLD SHIP OF ZION • LET ME CROSS OVER • CARAVANS: I WON’T BE BACK • JESUS WILL SAVE • FAMOUS DAVIS SISTERS TIRED • MEDITATION SINGERS: ONE MORE RIVER TO CROSS • HIS EYE IS ON THE SPARROW • IMPERIAL GOSPEL SINGERS SHALL BE SAVED • INGRAM GOSPEL SINGERS TAKE TIME TO BE HOLY • INEZ ANDREWS & ANDREWETTES I’M GLAD ABOUT IT • GOSPEL STARS LAMB ON THE ALTAR • SALLY JENKINS SINGERS GET MY MANSION READY • STARS OF FAITH MARY WHAT YOU GONNA NAME. 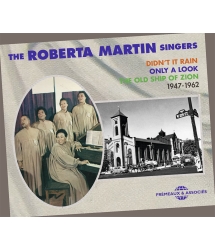 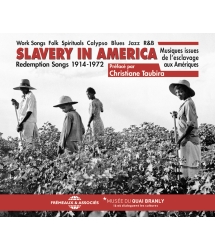 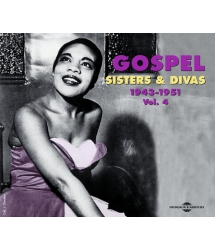 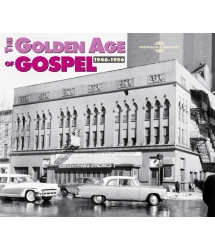 Whether just stepping forward from the choir at a Sunday service in their little churches, or dressed in brilliant colours that glittered under the spotlights in the greatest arenas, five singers, wearing their most beautiful robes, would literally give themselves to their audience for the glory and joy of the Lord. Sisters or priestesses, reverends and preachers, or just ordinary worshippers, they sang, quite simply, with a power and strength of conviction that one could only rarely find in other forms of the Afro-American vocal art.

Even so, it had taken them quite a while before they were able, not to excel, but simply to exist in a society where their role, absolutely essential, had remained hidden. Black American women, positioned on the lowest rung of the social ladder, occupied only subordinate roles in their churches. The latter institutions, with morality their concern, had little tolerance for autonomy among women, and refused to allow them to exhibit themselves in public, including inside places of worship. Many great voices, confined behind the walls of kitchens and vestries, were never able to ring out in broad daylight, and so they were lost to us (with the exception of their own children, who were happily lulled by their Negro spirituals.) Apart from a few evangelists (notably Arizona Dranes), record companies were only interested in women if they sang the blues, jazz or pop music, if not classical. Gospel songs had to emerge in the early Thirties, partly in addition to increased tolerance on the part of hallowed churches, before little mixed choirs could appear, and before a few solid feminine personalities established themselves. Women like Lucie E. Campbell, for example, a writer-composer and singer who led the National Baptist Convention from 1919 to 1962, or Sallie and Roberta Martin.
We have no evidence on record as to the existence of female vocal groups before the end of the Thirties; the record industry had largely ignored them until the day a little independent label opened its studio doors for Sallie Martin and her singers to troop inside. But people had to wait another few years, first for the end of the war, and then after the recording ban (not to mention other socioeconomic upheavals), before the creation of multiple independent companies who relayed “the majors” and contributed to launch rhythm & blues (in the secular sphere) and its gospel counterpart (in the religious domain). It is worth noting that in the secular world, black female vocal groups were also inexistent.
Finally, it is probable that the personality and tenacity of a few pioneering ladies, in addition to the popularity of the first solo female singers in the Forties (The Georgia Peach, Sister Rosetta Tharpe, Mahalia Jackson, Ernestine Washington) played a role of some kind in the feminisation of the world of religious music.
The female gospel groups that began to emerge were often made up of the best elements in church choirs. The groups often numbered five singers, although the groups generally counted between three and seven, and featured some extraordinary voices and personalities. Reaching all across the country, these ensembles formed remarkable nurseries for talents and served as a springboard for some of the latter, who later attempted careers, sometimes succeeding beyond their hopes, either in religious music or in the secular domain (in rhythm and blues, soul and pop music, and in television.)
Unlike the male vocal quartets whose members often sang a cappella or with very limited accompaniment, women’s groups were always backed by a piano and, most of the time, by an organ that provided a foundation in the lower register, whose tones were rarely reached by female singers. Due to the fact that the latter’s natural vocal register (soprano-alto) didn’t allow sufficient harmonic intervals, female voices didn’t operate (apart from exceptions) in the same way as their male counterparts, and favoured the resonance and brilliance of unisons, the power and beauty of their voices, and polyphony. A chorus would underpin and wrap the soloist, who would stand out against the other voices and at the same time draw the group higher to reach peaks of emotional intensity. The result provided spectacular performances where the sound rivalled in magnificence with the visual aspect.
And so, by the early Fifties, women’s groups were beginning to rival with their male colleagues in popularity, and then even supplant them as the jewel in the crown of this vocal art that had reigned for almost a century (since the end of the Civil War) over the world of Negro spirituals and gospel songs. After they became “Queens of the Golden Age of Gospel” they would continue despite the emergence of the great choirs and other forms of contemporary gospel. With a few modern thematic and orchestral adjustments, they still enjoyed enormous success playing for audiences at concerts and festivals – not to mention their active presence in numerous churches all across the country. In this domain, as in many others, women would gain revenge!
The aim of this set is to illustrate, as objectively and completely as possible, the history and place of female gospel groups during that great period we call The Golden Age of Gospel. Thanks to our collector-friends, who have lent us these recordings on 78 and 45 rpm discs (today otherwise unavailable), we were able to face a difficult choice and provide here, in all its musical diversity, the broadest possible panorama of these women’s gospel groups (known or unknown), their styles and forms of expression, and their most outstanding soloists. 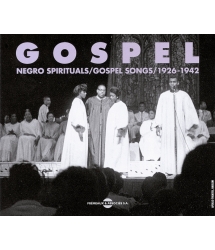 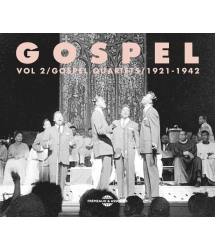