« The sound is both familiar and totally new » par Blues & Rhythm

Brass bands ? Well, when I was a kid the local band used to parade on High days and Holy days. Many years later I discovered the delights (I am well aware that some may query the use of that word !) of the New Orleans marching bands and later still, courtesy of Salm charters, his unsuccessfull but intriguing search for the roots of the blues, and the stunning photograph he used for the cover of « African Journey Volume Two », the sound of the Ghanaian brass bands. The fanfare bands of La Réunion, the small french island to the east of Madagascar in the Indian Ocean, began life, as did so many others, as military organisations before entering the local popular music and changing her drastically, though still maintening the marching tradition. As with New Orleans, the instruments were taken up by the descendants of slaves – from madagascar and East Africa in this case, probably around the middle of the nineteenth century, and changes began to occur. This music has not been well documented, but this CD includes eighteen recordings by Orchestre Toussaint from 2000 and four titles by Orchestre Henri Marhé from 1977. They are all pretty wild, with braying brass and swaying percussion (usually in 6/8 time), and Orchestre Toussaint also benefiting from the presence of an equally untrammelled accordion ! The numbers – perhaps I should mention this is an all-instrumental set – range from popular French songs to vintage sega (the island’s traditional music) and on to a waltz and a rumba-bolero, with just one example of the politically charged maloya. As befits a music with such a history the sound is both familiar and totally new. The packaging is fine, as is usual with this label, and there are very full notes in French, and an edited English version. This sound should certainly interest devotees of the New Orleans brass bands (particularly those that predate the current revival) ; if your interest is piqued, do investigate.
Norman DARWEN – BLUES & RHYTHM
Produits associés 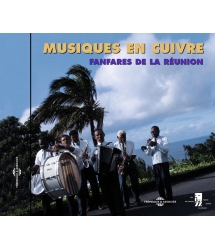